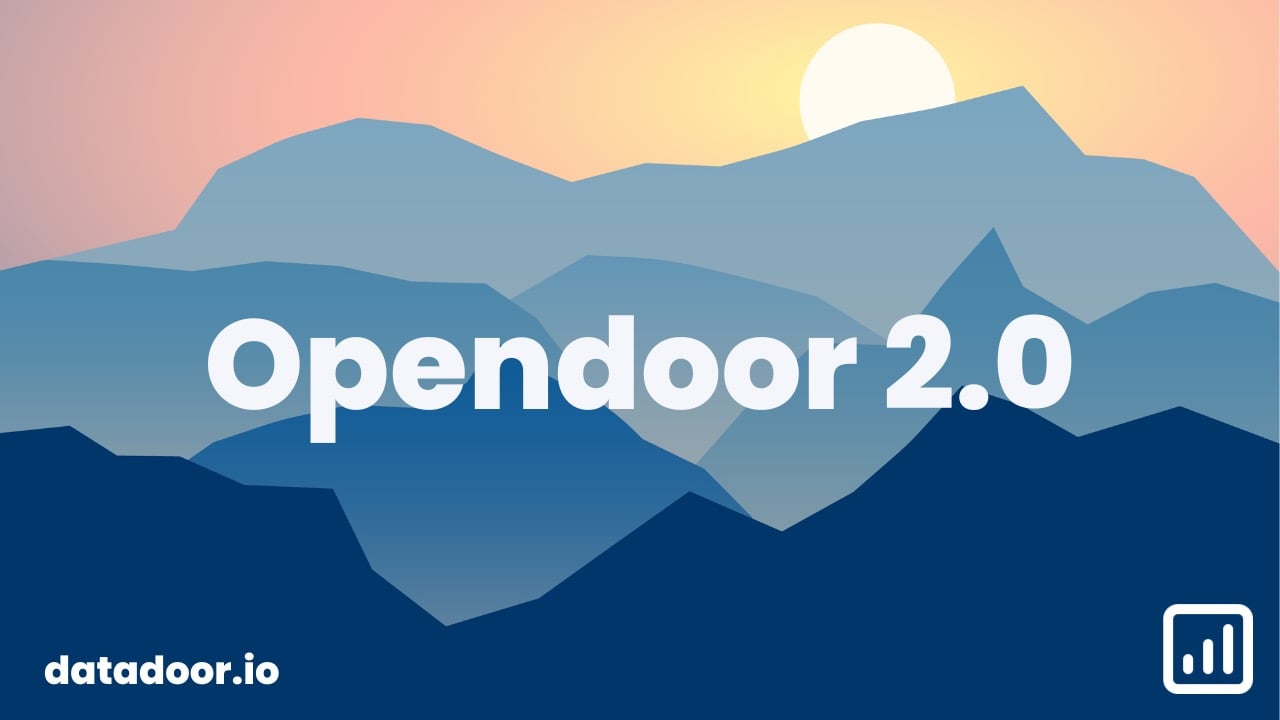 I want to start off this article by admitting I was wrong.

Not about the quarterly estimates. Frankly, I’m pleased with how close we were given the forecasting challenges of the quarter. Nor am I referring to Opendoor’s stock price, which I stopped trying to predict last year.

No, I was wrong about the Opendoor thesis, which is particularly painful because it’s the part I’m most committed to getting right.

My thesis has always been that Opendoor is market agnostic. In an up market Opendoor benefits from home price appreciation, although they may need to pay more than a home is worth to convert. In a down market Opendoor’s product (certainty, speed and simplicity) is inherently more valuable, which means higher conversion even if Opendoor’s fees/spread is higher.

In both situations there’s ample space for margin.

I still believe this is true. But there’s a blind spot in this thinking. I didn’t take speed of transition from up market to down market into consideration. Perhaps because this variable is historically negligible; as a country we’ve had double digit valuation and volume declines over a 2 – 3 month period a handful of times in modern history. But these are historic times.

I didn’t include the Fed’s action and the possible velocity of home price response in my framework. It seems Opendoor didn’t either.

My thinking was flawed, and I was wrong.

Opendoor has demonstrated they are indeed vulnerable to rapid market changes, with one bad housing market generating 2 – 3 quarters of consequent carnage for the company. In fact, based on company commentary/accountability I think if the events of this summer repeated themselves in 2023, the exact same thing would happen (massive losses, fire and brimstone, etc).

Opendoor posted a net loss of $928 million dollars in Q3. Now much has been made of this number and how unacceptably high it is. Agreed. But let’s break down what it actually means.

Opendoor lost $328 million in the quarter on company operations, driven by low margins and heightened selling costs. But the company also posted inventory valuation adjustments of $573 million. This means the company analyzed the portfolio of 16,873 homes and said 'we think these homes are worth $431 million less today than when we bought them, AND we think we will need to spend $142 million to sell them.'

Now the caveat here is this method supplies no counter-balance to the write-downs. It excludes homes with positive margins, and therefore over-estimates how far underwater the company actually is.

So in Q4 we will play the opposite game. All that downside was priced into Q3 earnings, meaning relatively unopposed upside in the Q4 print.

For example, today just under 50% of Opendoor’s listings are listed at prices higher than the company paid for them. The average embedded margin on those homes?

These homes have been excluded from the write-down, which means GAAP gross margins will be revised higher in Q4.

I don’t want to get too bogged down defending the company posting a net loss of nearly a billion. But Opendoor’s financials are all-too-often sensationalized. There's some upside with all that bad there.

Perhaps the craziest part of the earnings call was Opendoor’s guidance to close out the year.

With only 3 weeks left in Q4 I don’t agree with any of these numbers.

Not one of them.

Remember, Datadoor’s pending pipeline data allows us to look 4-5 weeks into the future, meaning we can already see 75% of Opendoor’s Q4 performance. In fact, over the past three quarters Datadoor has made quarterly estimates at the same time the company provided guidance, and we have been more accurate than the guide across every KPI. 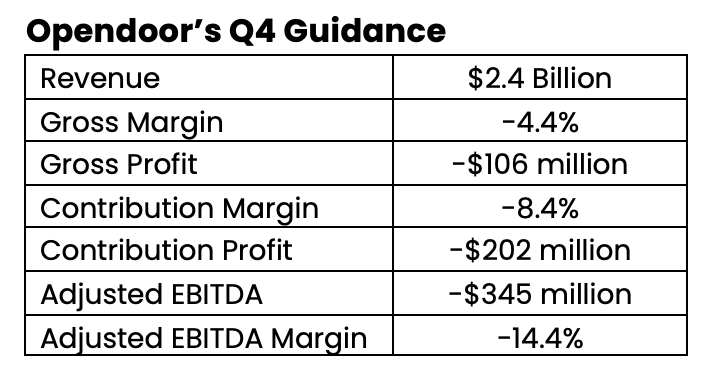 Here's me when I backed out these numbers:

I will be sending out a deeper analysis of this guide and the quarter-to-date performance to Datadoor subscribers over the next few weeks. That said, I will say I find this guidance intensely conservative.

Despite all the noise of this quarter, the write downs and the head-scratcher of a guide, there’s reason to be excited for what’s to come. Opendoor's second act.

CEO Eric Wu has been far too quiet in keeping investors informed and sharing his vision, however, his job is fundamentally to find the next S-curve for the company. And I think he has.

On the call Wu announced the launch of Opendoor’s potentially blockbuster third party (3P) business in Dallas Fort-Worth and Austin. Even wilder, Wu made the bold proclamation that 3P marketplace and 1P Opendoor Exclusives transactions would constitute 30%+ of Opendoor’s volumes this time next year.

To be clear, this is not a "pivot." While the 3P marketplace launch is new, the company was building towards it for years. Opendoor has crafted the infrastructure to sell to institutions since at least 2019, and the Opendoor Exclusives product was launched over a year ago. You can even find evidence that the marketplace was the ultimate goal of the company in their original Series A pitch deck. 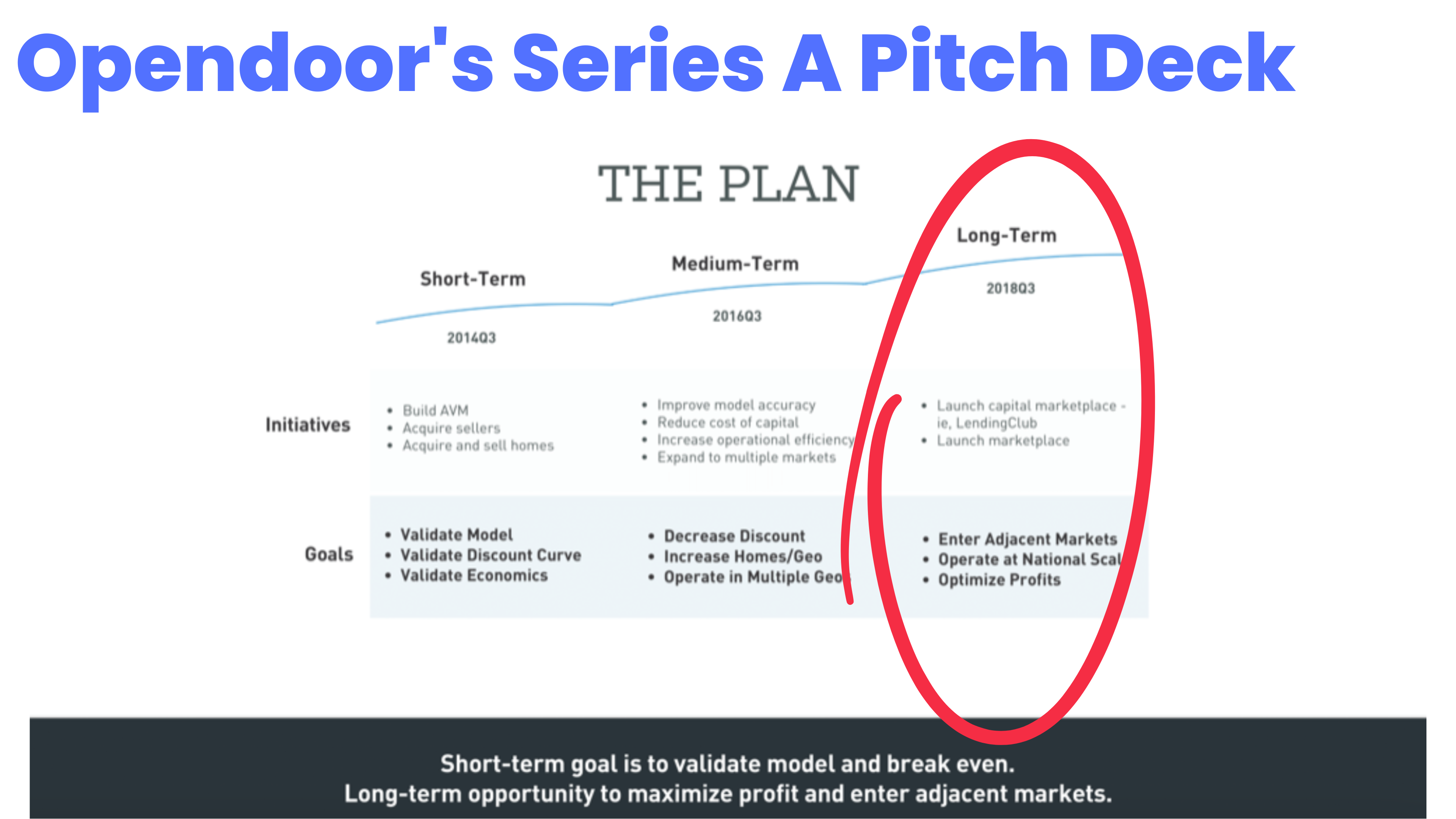 Through the marketplace, sellers can list their homes and field multiple offers from individual home shoppers, institutional investors and Opendoor itself. Seeded by Opendoor’s first party business (1P, iBuying) this platform will marry sellers to shoppers without Opendoor having to purchase and hold homes in between. For each transaction Opendoor will collect a 5% fee (just as it does with 1P), but with none of the operational cost and risk of the 1P business.

I believe this marketplace is the best expression of the iBuying business. A platform with software-like gross margins and limited macro risk. And this is the type of business only Opendoor can build, because it is backstopped by the 1P business (i.e. the seller always has the option to sell to Opendoor).

For example, Zillow cannot build this 3P marketplace, because when it’s all said and done Zillow is unable to provide an offer to buy the home from the seller.

More importantly, this marketplace is off MLS, meaning no commissions to Zillow’s most important customers: real estate agents. If Zillow were to try building such a product it would cannibalize their primary business. This is classic counter-positioning strategy.

I started this post by admitting I think if housing dropped suddenly in 2023 (or whenever), Opendoor would lose just as much money. I would like to add a few asterisks to that.

Just how much does this marketplace concept improve Opendoor’s business? Assuming Wu is right, and this time next year 30% of Opendoor’s transactions are on the Exclusives marketplace, what do margins and revenues look like?

Take a baseline model. Let’s say in 2023 Opendoor sells 40,000 homes (roughly what I expect in 2022) via its 1P business (no Opendoor Exclusives, no 3P). Here are the baseline assumptions: 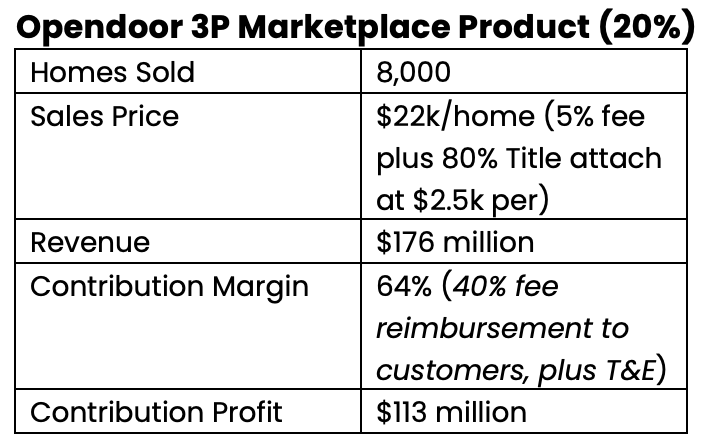 Bringing all this together, the comparison of Opendoor 1.0 and Opendoor 2.0 are as follows:

Opendoor 2.0 posts the same number of homes sold but earns an extra 24% contribution profit per dollar of revenue. And this is just at the forecasted scale of the marketplace’s first year. While iBuying probably always had a financing/volume ceiling, Opendoor’s marketplace knows no such limits. In fact, it would not surprise me if the majority of Opendoor’s transactions took place off-balance sheet in 2025 and beyond. For our part, we track Opendoor Exclusives transactions alongside sales to institutions through the Datadoor engine.

By all accounts, Q3 and Q4 were and will be dismal quarters. The thesis has been sprayed with bullets and more than a few hit their mark. We are plowing full-steam into a recession and gale-force headwinds abound.

And yet…I remain convicted Opendoor is building something truly exceptional. Perhaps I'm naïve with everything happening, but I can’t escape this core idea that the housing transaction needs to be better, and that Opendoor is leading the vanguard aginst this massive problem.

Opendoor must get leaner. Hungrier. It’s going to hurt.

But for the right team these setbacks have a tendency to inspire that hunger to win again; a ferocity. And the improvements squeezed out compound over time, even if they seem apart from the main plot right now.

Meanwhile the new focus of the company is to incinerate prior timelines and pull-forward the most sustainable expression of the iBuying business to today. This second act is complementary to iBuying and now more than ever absolutely necessary.

The deck is stacked against them, but I still like Opendoor’s odds.